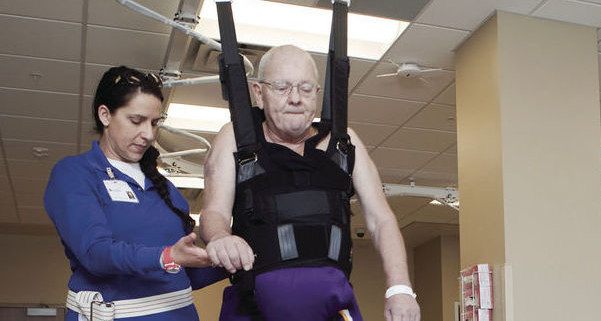 On January 11, Rick Schmidt’s golf shoe caught on the accelerator and his car smashed into a tree.  The accident in Trilogy at Vistancia caused an incomplete spinal cord injury that essentially rendered Schmidt, 64, a quadriplegic — plus left him with a broken leg.

Cobalt Rehabilitation Hospital in Surprise wasn’t even open yet. But the new hospital and a determined patient would team up with near miraculous results, once Schmidt heard there was a slight chance he could walk again.

“When I found out I didn’t sever my spine, but it was crushed, and I found out there was a minute possibility, I was determined to walk again,” Schmidt said Friday. “I don’t accept failure. I will win. When I make up my mind to do something, it’s done.”

The 40-bed rehab campus at 13050 W. Bell Road began accepting patients January 18.  St. Joseph’s Hospital and Medical Center in Phoenix called Cobalt about Schmidt and at that point, about 10 days after his crash, he could only wiggle his toes. Schmidt was transferred from St. Joseph’s to Cobalt on Jan. 27 as the rehab hospital’s 12th patient.

Schmidt could not move otherwise, could not feed himself and had no control over bodily functions. The Cobalt team began efforts to reacquire these skills as well as moving Schmidt’s limbs for him to avoid spasticity and atrophy.

Therapists worked on strengthening upper extremities through active resistance. They also put him in a lift to simulate sitting up, and a sliding board for mobility in bed.

Cobalt has the Aretech ZeroG Gait and Balance System, which allowed him to walk in simulated gravity-free environment. Noe said the harness allows patient to redevelop a normal walking gait rather than taking first halting steps with a walker.

Once a patient improves, the ZeroG program can add virtual obstacles to test how they can work their way around without falling. 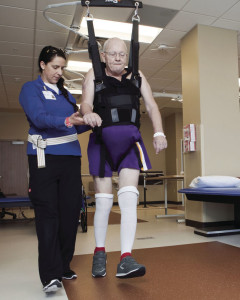 Tina Serbin, a Cobalt physical therapist, shows Rick how to use the ZeroG Gait and Balance System

It was a test of the all-new team at the just opened hospital. Cobalt has state of the art equipment but most of it had not been used with a patient.

Those working with Schmidt had to be in lockstep on his diet, rehab regimen and communication of what he needed help with and what he needed to do himself.

“You still don’t expect it within 10 days,” Sharon Noe, Cobalt CEO said. “We huddled each morning and discussed his case. The therapists get a lot of accolades and they’re well-deserved, but nursing is a critical component. These are not just nurses that hand out meds, they’re rehab nurses and participate in the rehabilitation process as much as the therapist.”

Schmidt credited the entire team at Cobalt for their upbeat attitude, responsiveness and thoughtful planning.

By the end of his time at Cobalt, Schmidt was able to take 589 steps in a day on ZeroG, and about 170 with his walker.

When he left, Noe said Schmidt was at least four to six months ahead of the normal curve. Cobalt worked on wheelchair seating and placement. But instead of a typical rehab for this injury — which is 90 percent wheelchair based — Schmidt’s program was 30 to 40 percent with the wheelchair, Noe said.

Schmidt said his neurologist told him in March that he’ll make a full recovery in between one year and 18 months.