Accustomed to running around on the softball field, Northeast Lauderdale alumna Alixus Hearn decided she wasn’t going to be sitting down for the rest of her life.

On Oct. 2, 2017, Hearn was involved in a car wreck that ejected her from her vehicle and left her paralyzed from the waist down due to her fourth and fifth thoracic vertebra being bruised and twisted. Initially, doctors told her she may never walk again, but Hearn opted for a vigorous rehab program at Methodist Rehabilitation Center in Jackson.

“Sitting down for a long period of time, I just wasn’t with that,” Hearn explained. “Having my mom and dad with me, they kept the positive energy around me. I just put everything in and went head first. I wasn’t sitting down until I got better.”

It began with baby steps last November, followed by using a walker to help her. Eventually, she ditched the walker for a cane, which she used from February until May. Now, Hearn no longer uses the cane to walk.

“It feels amazing,” Hearn said. “I can’t really explain it. It’s just been amazing. I don’t have to depend on anything to help me walk.”

Methodist offered Hearn rehab technology like the ZeroG Gait and Balance System, a device connected to an overhead track that harnessed Hearn upright, allowing her to do a wide range of motion activities while preventing her from falling. Originally, she went to therapy three times a week, but now her sessions have been reduced to once a week.

Having access to high-tech rehab equipment made a big difference in Hearn learning to walk again, and she said she’s grateful to live in a time where such technology is at her disposal.

“I don’t think Meridian gets that many spinal injury patients,” Hearn said. “They probably wouldn’t know what to do. I tried every piece of equipment (Methodist) had, and it helped a lot. I’m grateful for that.”

Emotional support proved just as important as physical support, and that began with Hearn’s parents, Allison Hearn and Demitrius Robinson.

“They did every single thing they could to keep me motivated and pumped,” Hearn said. “Both of them were my motivators. They did a good job with keeping my spirits up.”

That emotional support extended to her Lady Trojan teammates, who adopted the slogan “13 strong” in honor of Hearn, who wore No. 13 for Northeast Lauderdale.

“That meant everything to me,” Hearn said. “It showed me how much they cared and loved me.”

Being a softball player also helped in her rehab from a physical standpoint.

“Even my therapist said that since I played sports, I had a lot of muscle, and that was good,” Hearn explained. “In my sessions, there were some spots where I was stronger just because I played softball and had all that extra weight.”

Now a student at Meridian Community College, Hearn plans to transfer to Mississippi State and earn a degree in athletic training. Having grown up playing sports, Hearn said she would love to continue being around athletics as a trainer.

“At first, I just played for fun so I wouldn’t get bored, but as I gradually got into it, I just fell in love with the game even more, being out there and doing what I do best,” Hearn said.

ZeroG creates a safe environment so therapists can perform high level balance training and functional mobility without the risk of their patient falling.  Physical Therapists enjoy using ZeroG for stair navigation and gait training, while Occupational Therapists at Gaylord are using ZeroG for other home management tasks like reaching down to pick up an object and carrying a laundry basket. 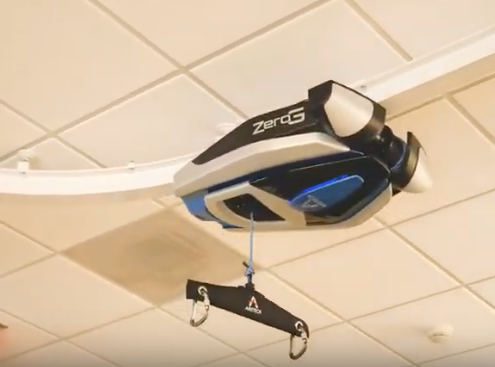 The therapists at Gaylord have used ZeroG for all types of their patients such as pulmonary, those after a traumatic brain injury, stroke, or spinal cord injury and general medical patients.  ZeroG has helped the therapists at Gaylord by allowing them to get their patients up on their feet a lot quicker and try activities that they may not have tried previously due to safety concerns.

Aretech announced the release of Ovation at the American Physical Therapy Association’s Combined Sections Meeting (APTA-CSM) in Washington, DC.  Ovation is the first technology in the world to offer dynamic body-weight support and fall protection for patients training on a treadmill who weigh up to 700 pounds.

“Ovation builds upon our 11 years of experience with robotic body-weight support systems to create the only treadmill system for gait and other functional activities designed for the widest range of individuals, including bariatric patients.  Over the past few years, therapists have been asking us to create a rehabilitation technology that can also be used by their largest patients, some nearing 700 lbs,” said Dr. Joe Hidler, CEO of Aretech.  “We’re proud to deliver on that. Ovation has the highest dynamic body-weight support capability in the world and can make an individual feel up to 350 pounds lighter. This, we hope, will encourage participation by those who find walking difficult due to weakness, load-induced pain and strain on joints.”  Dr. Hidler highlights some of the other features which are unique to Ovation,  “We’ve created an interactive experience for the patient with an infotainment display with virtual walks, photo galleries and cognitive tasks, while providing constant feedback on the heart rate, calories burned, treadmill speed, and other valuable metrics.”

At APTA-CSM, therapists had the opportunity to experience Ovation. “Therapists learned how broad the applications of Ovation could be for all of their patients.  They were excited at the prospect of using Ovation for their neurological patients for manual assisted treadmill training as well as being able to provide their bariatric patients with the same level of rehabilitative care,” said Don Gronachan, Aretech’s Director of Product Development. 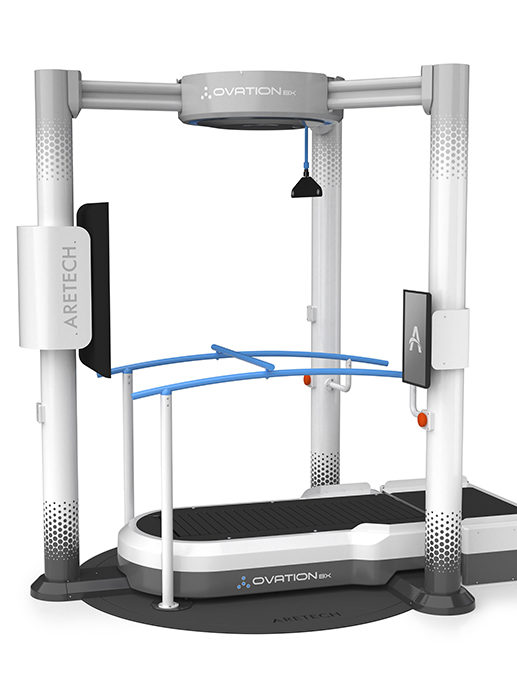 Ovation uses the same best-in-class robotic body-weight support technology that is used in Aretech’s ZeroG Gait and Balance System.  Ovation gives therapists the opportunity to safely treat the widest range of adults from 75 to 700 pounds with dynamic body-weight support and fall protection on a treadmill.  Ovation’s dynamic body-weight support can offload the patient’s weight between 25-350 lbs to assist even the heaviest of patients.  The system also includes Aretech’s proprietary DualArrestTM Fall Protection.  Should the patient start to fall, Ovation will prevent their fall and simultaneously stop the treadmill for ultimate safety.

Ovation was designed to be an interactive experience by encouraging participation using an infotainment display mounted in front of the treadmill.  Patients can watch their training metrics, set goals such as target heart rate or calories, all while exploring the world through virtual walks and landscapes.  A patient resting bench comes standard with Ovation.  The patient can simply sit while still connected to the robotic BWS system above to take a break before resuming their session.  Ovation captures training intervals so therapists can monitor these breaks in comparison to the level of activity.  All session data is saved to a secure database to track progress and outcomes.

“Aretech is proud to continue to advance the field of rehabilitation forward with innovative, first-to-market technologies which has never been seen before,” said Hidler.   “We have created the first technology that gives therapists the opportunity to treat the widest range of patients safely on a treadmill, including their bariatric patients.”