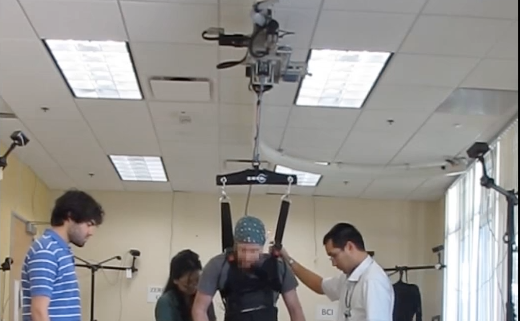 The ability to walk has been restored following a spinal cord injury, using one’s own brain power, according to research published in the open access Journal of NeuroEngineering and Rehabilitation.

This is the first time that a person with complete paralysis in both legs (paraplegia) due to spinal cord injury was able to walk without relying on manually controlled robotic limbs, as with previous walking aid devices.

The participant, who had been paralyzed for five years, walked along a 3.66m long course using an electroencephalogram (EEG) based system. The system takes electrical signals from the participant’s brain, which then travel down to electrodes placed around his knees to create movement.

Dr. An Do, one of the lead researchers involved in the study, from University of California, Irvine, USA, says: “Even after years of paralysis the brain can still generate robust brain waves that can be harnessed to enable basic walking. We showed that you can restore intuitive, brain-controlled walking after a complete spinal cord injury. This noninvasive system for leg muscle stimulation is a promising method and is an advance of our current brain-controlled systems that use virtual reality or a robotic exoskeleton.”

Mental training was initially needed to reactivate the brain’s walking ability. Seated and wearing an EEG cap to read his brainwaves, the participant trained to control an avatar in a virtual reality environment. He also required physical training to recondition and strengthen his leg muscles.

The participant later practiced walking while suspended 5cm above ground, so he could freely move his legs without having to support himself. On his 20th visit, he translated these skills to walk on the ground and wore the ZeroG Gait and Balance Training System for aid and to prevent falls. Over the 19 week testing period, he gained more control and performed more tests per visit. 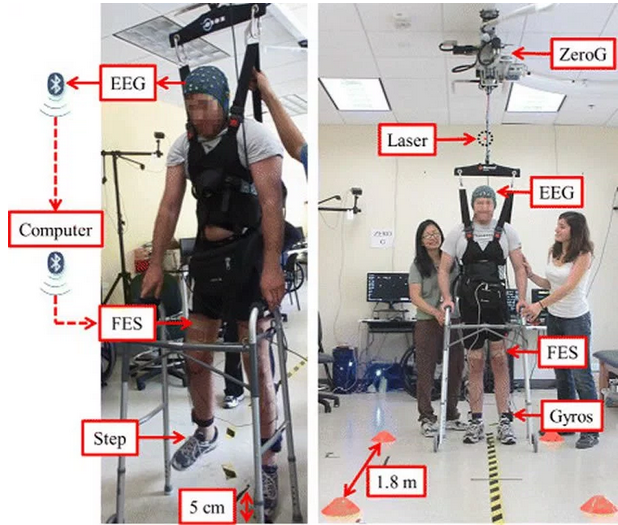 Experimental setup.    Left: The suspended walking test. In response to “Idle” or “Walk” cues displayed on a computer screen (not shown) the participant modulates his EEG by idling or attempting to walk. EEG is sent wirelessly (via Bluetooth communication protocol) to the computer, which processes the data and wirelessly sends a decision to either “Idle” or “Walk” to a microcontroller. The microcontroller (placed in the belt-pack) drives the FES of the femoral and deep peroneal nerves to perform either FES-mediated standing or walking (in place). Right: The overground walking test. In response to verbal cues, the participant performs BCI-FES mediated walking and standing to walk along a linear course and stop at three cones positioned 1.8 m apart. The basic components are: the BCI-FES system, motion sensor system (two gyroscopes and a laser distance meter), and the ZeroG body weight support system to prevent falls. The information flow from EEG to FES is identical to that of the suspended walking test. Note that the participant’s face was scrambled due to privacy concerns Credit: King et al. Journal of NeuroEngineering and Rehabilitation 2015. 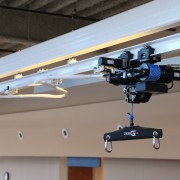 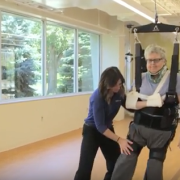 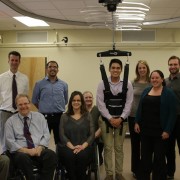 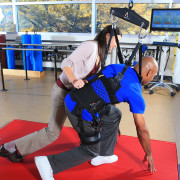 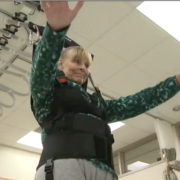 Quadriplegic man dances with his wife in the ZeroG Gait and Balance Training...
Scroll to top