Aretech, LLC, an advanced rehabilitation technology leader, announced the release of Version 3 of the ZeroG Gait and Balance System at the American Physical Therapy Association’s Combined Sections Meeting (APTA-CSM) in San Antonio, TX. The new ZeroG is the most sophisticated robotic body-weight support system in the world. The system has been redesigned with more features, more versatility, and even higher performance. With the WaveLink WiFi Guardian, ZeroG becomes the first and only completely wireless system in its class not dependent solely on Wi-Fi connectivity.

“The new ZeroG truly encompasses over a decade of experience working hand in hand with physical therapists around the world to deliver the most advanced rehabilitation technology for treating gait and balance disorders,” said Joe Hidler, CEO of Aretech and inventor of the ZeroG Gait and Balance System. “Our commitment to patient safety is reflected in numerous new safety features, including the WaveLink communication protocol. This provides therapists an alternate method of controlling ZeroG independent of a Wi-Fi signal.” Dr. Hidler also believes the new features of ZeroG will help deliver a premium rehabilitation experience. “One of the new features we are most excited about is the new dynamic fall recovery with ActiveAssist, which intelligently adapts the dynamic body-weight support after a fall to aid those patients who may need assistance regaining control.”

At APTA-CSM, therapists had the opportunity to try the new ZeroG. “Therapists really appreciated our new fall cushioning technology. This softens the impact for the patient when ZeroG catches a fall, making for a much more comfortable experience,” said Don Gronachan, Aretech’s Vice President of Sales and Marketing. 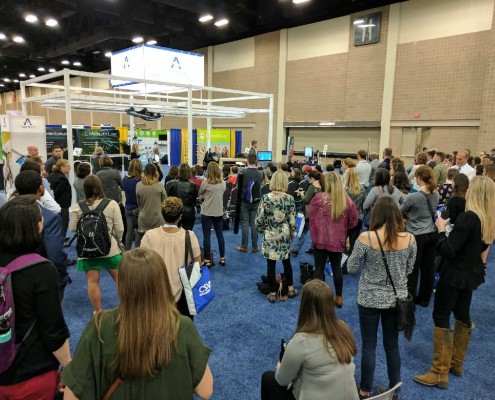 The Most Sophisticated ZeroG Ever

Originally launched in 2008, ZeroG gives therapists the opportunity to safely treat a broad range of patient populations with dynamic body-weight support in functional activities such as overground walking, sit-to-stand, getting off the floor and stairs. Building upon innovations pioneered by Aretech, ZeroG Version 3 represents the biggest redesign in years. The system now has the capacity to support up to a 450-pound patient. Because ZeroG may be used to raise a patient to standing, one therapist can train heavy patients without the risk of falling.

The dynamic body-weight support of ZeroG is the fastest and most precise available, accurately tracking vertical movements at over 26 inches per second, which is twice as fast as similar systems on the market. This provides patients a stable environment with constant body-weight support even when getting to standing from a chair or the floor. Using ZeroG Kinetics, therapists can choose from various balance training programs using real-time biofeedback to treat their patients in anticipatory balance activities. And for those who have two ZeroG robotic trolleys on the same track, ZeroG has the new Stealth Detection feature, which acts as invisible bumpers to propel the second robot out of the way when not in use for a truly infinite track.

“Aretech is proud to continue to advance the field of rehabilitation forward with innovative, first-to-market features which have never been seen before,” said Hidler. “We’ve been able to take our experience and create the most sophisticated rehabilitation system on the market that gives therapists and patients the best opportunity to improve outcomes.”

About Aretech
Aretech (http://www.aretechllc.com), headquartered in Ashburn, Virginia, is a world leader in developing advanced rehabilitation technologies for improving function and independence. The company has a strong commitment to quality, innovation, and developing technology based on evidence-based research.