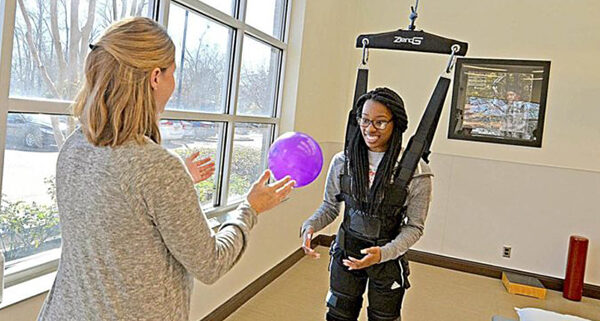 Accustomed to running around on the softball field, Northeast Lauderdale alumna Alixus Hearn decided she wasn’t going to be sitting down for the rest of her life.

On Oct. 2, 2017, Hearn was involved in a car wreck that ejected her from her vehicle and left her paralyzed from the waist down due to her fourth and fifth thoracic vertebra being bruised and twisted. Initially, doctors told her she may never walk again, but Hearn opted for a vigorous rehab program at Methodist Rehabilitation Center in Jackson.

“Sitting down for a long period of time, I just wasn’t with that,” Hearn explained. “Having my mom and dad with me, they kept the positive energy around me. I just put everything in and went head first. I wasn’t sitting down until I got better.”

It began with baby steps last November, followed by using a walker to help her. Eventually, she ditched the walker for a cane, which she used from February until May. Now, Hearn no longer uses the cane to walk.

“It feels amazing,” Hearn said. “I can’t really explain it. It’s just been amazing. I don’t have to depend on anything to help me walk.”

Methodist offered Hearn rehab technology like the ZeroG Gait and Balance System, a device connected to an overhead track that harnessed Hearn upright, allowing her to do a wide range of motion activities while preventing her from falling. Originally, she went to therapy three times a week, but now her sessions have been reduced to once a week.

Having access to high-tech rehab equipment made a big difference in Hearn learning to walk again, and she said she’s grateful to live in a time where such technology is at her disposal.

“I don’t think Meridian gets that many spinal injury patients,” Hearn said. “They probably wouldn’t know what to do. I tried every piece of equipment (Methodist) had, and it helped a lot. I’m grateful for that.”

Emotional support proved just as important as physical support, and that began with Hearn’s parents, Allison Hearn and Demitrius Robinson.

“They did every single thing they could to keep me motivated and pumped,” Hearn said. “Both of them were my motivators. They did a good job with keeping my spirits up.”

That emotional support extended to her Lady Trojan teammates, who adopted the slogan “13 strong” in honor of Hearn, who wore No. 13 for Northeast Lauderdale.

“That meant everything to me,” Hearn said. “It showed me how much they cared and loved me.”

Being a softball player also helped in her rehab from a physical standpoint.

“Even my therapist said that since I played sports, I had a lot of muscle, and that was good,” Hearn explained. “In my sessions, there were some spots where I was stronger just because I played softball and had all that extra weight.”

Now a student at Meridian Community College, Hearn plans to transfer to Mississippi State and earn a degree in athletic training. Having grown up playing sports, Hearn said she would love to continue being around athletics as a trainer.

“At first, I just played for fun so I wouldn’t get bored, but as I gradually got into it, I just fell in love with the game even more, being out there and doing what I do best,” Hearn said.

No More “Fear of Falling” with the ZeroG Gait and Balance Syste...
Scroll to top