Three years ago, Jewel Currie, a Milwaukee Business owner, suffered a broken neck after falling at home.  His doctors told him he would never walk again.

Shortly after his diagnosis as a complete spinal injury, Jewel started to regain some function, and with it, the hope that he may be able to return to some of his favorite activities. This is where his therapy journey began.

Three years after starting continuous Physical and Occupational Therapy, Jewel began to see his progress slow which put his goals seemingly far out of reach. Seeing his progress plateau had a big impact on Jewel’s outlook and overall mental health. “I was getting down and depressed,” Jewel remembers as he thought he had to accept the reality that he would not get back on the golf course.

As luck would have it, a brand-new clinic was opening at Marquette University that would give Jewel one last shot at getting back on the golf course. 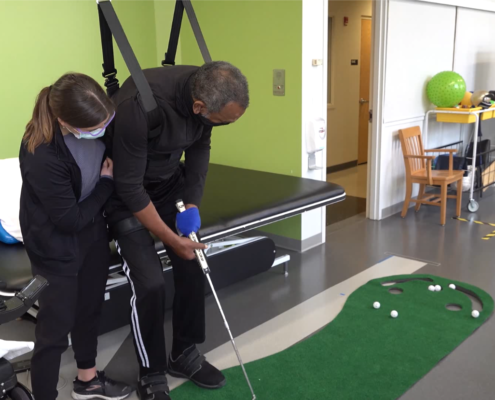 Marquette University is a Catholic, Jesuit University located near the heart of downtown Milwaukee, Wisconsin that offers a comprehensive range of majors in 11 nationally and internationally recognized colleges and schools. Marquette’s Physical Therapy Program is ranked thirteenth nationally

The Neuro Recovery Clinic, located on campus, is the first of its kind in Wisconsin and is equipped with state-of-the art technology and experts in Neuro Rehabilitation.

The gym itself is only 1,100 square feet, which is much smaller than what you may expect when you hear of everything they offer. Kim DeChant, PT, DPT, NCS, and Clinical Coordinator of the Clinic describes the space as “small but mighty” and they have the outcomes to prove it.

Jewel enrolled in the intensive therapy program offered at the clinic based on a referral from his doctor and began immediately seeing results.

Melissa Dygulski, PT, DPT, NCS, recalls Jewel’s first evaluation day, “He walked maybe 15-20 feet tops before having to sit down because he felt his legs were going to give out.”  After a few weeks of training in Aretech’s ZeroG Gait and Balance System, Jewel was able to walk close to 800 feet total in the session, which is much beyond what he had set as his goal for the day.

Now the golf course is back in sight and Jewel has set a goal for himself that he will be back with his buddies this summer. Although for Jewel, “the score doesn’t make a difference.”  He just wants to play.

When asked to reflect on where he was before he entered Marquette’s Intensive Program and where he is today, the progress he has made, and the relationships he has developed with this therapy team, he put it simply:

“It means the world to me.”

ZeroG Helping Patients Back on their Feet Faster

ZeroG at the Center for Human Performance Optimization
Scroll to top