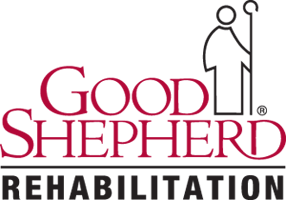 The harness, similar to the kind used by rock climbers, was attached to a pulley system mounted to a track in the ceiling. And, once snug around Price’s torso and legs, it gently pulled her out of her wheelchair and up to her feet for the first time since July, when she suffered a debilitating stroke.

If the 67-year-old Allentown resident’s legs were unsteady, her wide smile was not.

“She likes it here. Here, they make her do stuff,” Price’s daughter, Shana Allen, said of the Good Shepherd Health & Technology Center in Allentown. “She feels motivated. Before, she was doing nothing. Now she wants to get up. She wants to walk.”

The harness and ceiling track system, called the ZeroG, is one of the new pieces of state-of-the-art equipment in Good Shepherd’s expanded neuro and orthopedic outpatient rehabilitation facility, which opened last week.

Price was just the second person to use the ZeroG. Meanwhile, just behind her, another patient, Amitkumar Patel, was stepping along the new Zeno Walkway — a floor pad filled with pressure sensors.

Patel, recovering from a brain aneurysm, then watched a video replay on a computer monitor. “Look at your right knee,” physical therapist Nicole Smith said to him. Then she pointed to the accompanying color-coded computer graphic of his footsteps. “Can you see how your toe is pointing out more than the other one?” she said. “This time we’re going to try it without a cane.”
The expanded neuro and orthopedic facility is situated in a part of the hospital that had been used for assistive technology. Assistive technology was relocated to another area that had been office space.

All of the services and technology at Good Shepherd are designed to help people regain basic abilities and everyday skills, explained Vice President Frank Hyland. “We’re all about function,” he said.

Good Shepherd Rehabilitation Network, affiliated with the Evangelical Lutheran Church in America, was founded in 1908. Today, in addition to its main hospital in south Allentown, it operates 22 outpatient sites, four inpatient sites, two long-term care homes for people with severe disabilities, an independent living facility and a long-term acute care hospital within Lehigh Valley Health Network-Muhlenberg in Bethlehem. It also has a partnership with Penn Medicine, through which it serves the Philadelphia area.

The expanded neuro and orthopedic facility also offers much-needed space for use of Ekso robotic exoskeletons, said Hyland, who is also a physical therapist.

The Ekso fits around a person’s body and limbs and, using a combination of manual control and automatic sensors, allows wheelchair users to stand up and walk. A computer interprets the instructions and orchestrates every step with the use of motors that make the mechanism work like a smart robot.

Because the Ekso puts the body in a natural, upright biomechanical position, repeated use can allow some people suffering from partial paralysis to relearn how to stand upright and even walk on their own, according to Hyland, who said he is seeing patients make progress that was unimaginable just a few years ago.

“This is not an end product. This is a tool,” Hyland said of the Ekso, on which Good Shepherd has logged more than 1 million steps — more than any other rehabilitation facility in the world.

Patients at Children’s Specialized Hospital Use ZeroG for Optimal Recovery...