Two recent studies have demonstrated that patients with acute cerebrovascular accident (CVA) and traumatic brain injury (TBI) who use Aretech’s ZeroG Gait and Balance System during their acute inpatient therapy program achieved higher gains in overall score on the Functional Independence Measure (FIM) as well as sub-categories of the FIM when compared to standard of care (SOC).  Both studies were led by Dr. Lumy Sawaki, MD, PhD, Department of Physical Medicine & Rehabilitation at the University of Kentucky. 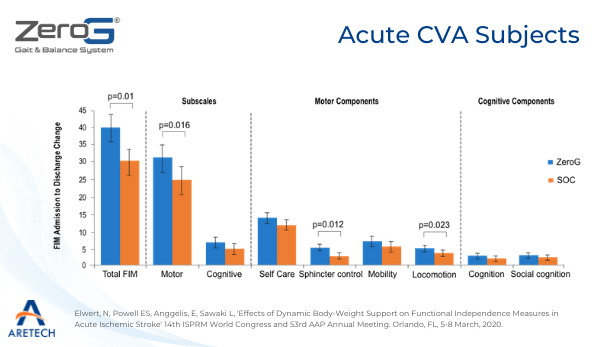 The second study followed the same protocol except each group included a cohort of 6 patients with TBI.  The results of this study were even more pronounced.  The average change in overall FIM scores in the group of patients who utilized ZeroG during their acute rehabilitation more than doubled the changes in the SOC group (ZeroG: 59.7, SOC: 21.1; p = 0.007).  In addition, the group that utilized ZeroG demonstrated statistically significant gains in Motor FIM (p = 0.008) and Cognitive FIM (p = 0.021), as well as Self-Care, Mobility, Locomotion, and Social Cognition subscales when compared to SOC.­ 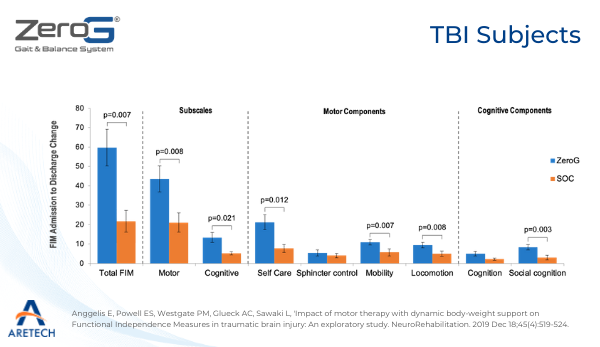 Aretech’s CEO and inventor of ZeroG, Dr. Joe Hidler, said these studies confirm the ideology he and his team had when the idea for ZeroG was first conceived back in the early 2000’s.  “When I first started working on ZeroG, I felt that the system could help patients achieve much higher outcomes than standard of care because ZeroG’s dynamic body-weight support would allow them to begin high-intensity physical therapy earlier in their rehabilitation program, and ZeroG’s advanced fall protection takes away the fear of falling and getting injured.”

Dr. Sawaki agrees and says the staff and patients loved using ZeroG.  “We found that patients immediately took to ZeroG and felt comfortable pushing themselves during activities they normally would be afraid to do.  For our staff, they didn’t have to worry about the safety of the patient because ZeroG took care of that.  Instead, they could focus on the quality of the therapy, and have patients practice the types of activities they would do at home and in the community.”

Dr. Hidler added. “ZeroG is so much more than a simple fall-protection system.   The dynamic body-weight support helps compensate for impairments such as weakness and abnormal synergy patterns.  This allows patients to begin their therapy as soon as they are medically stable and as their abilities improve, the therapist can reduce the amount of body-weight support and make the therapy more challenging.  This progressive therapy approach can be done with a single therapist, which helps to reduce healthcare costs.”

About the ZeroG Gait and Balance System

The ZeroG Gait and Balance System has been used by patients since 2008 and is intended for patients in rehabilitation. ZeroG safely allows walking overground, functional activities, balance and fall prevention training in a ‘reduced gravity’ environment.  The system consists of dynamic body-weight support, fall protection, robotic trolley tracking which anticipates and reacts to patient movements, and TRiP for applying perturbations.  The patient has full freedom to practice a wide variety of activities including steps, getting up from a chair, picking up objects, and using assistive devices such as walkers or canes.

Aretech (http://www.aretechllc.com), headquartered in Ashburn, Virginia, is a world leader in developing advanced rehabilitation technologies for improving function and independence. The company has a strong commitment to quality, innovation, and developing technology based on evidence-based research.

No More “Fear of Falling” with the ZeroG Gait and Balance Syste...