Emergency room physician, Matthew Wetschler was body surfing when a wave sent him head first into the ocean floor. He was found floating in the water with a broken neck and without a pulse. He was given CPR on the beach, and was rushed to the hospital without the ability to move his arms or legs. Three hours later, he was in a pioneering “ultra early surgery” and was able to slightly move his left hand and leg the next day.
Just over a week later, Wetschler was transferred to Santa Clara Valley Medical Center’s inpatient rehabilitation unit. He used Aretech’s ZeroG Gait and Balance System to practice getting to standing, walking, lunges, kicking a soccer ball, and tossing and catching inflatable balls. 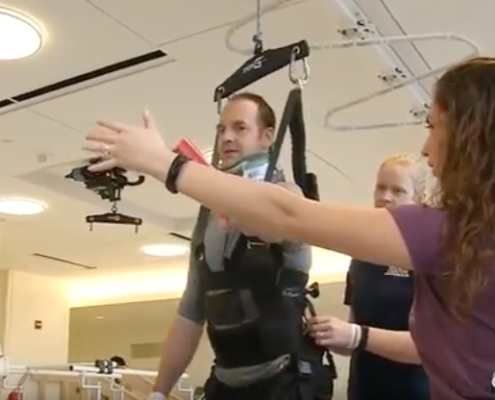 Because of all those involved in his recovery, and by using ZeroG to safely practice intensive therapy, Matthew Wetschler’s pace of recovery has been uncharacteristically rapid.
https://www.aretechllc.com/wp-content/uploads/2018/01/Wetschler-SCI.png 559 982 Aretech Administrator /~aretechllc/wp-content/uploads/2015/05/aretech-header-logo.png Aretech Administrator2018-03-01 09:03:422018-07-12 09:06:41ZeroG Used in Recovery after Body Surfing Accident
0 replies

Representative Steve Scalise Relearns to Walk with Help from ZeroG